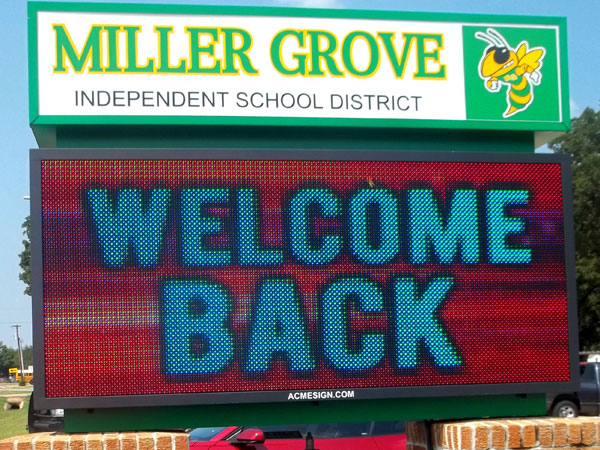 Miller Grove ISD is a small 1A school district with an average enrollment of about 300 students from Pre-K through 12th grades. The district encompasses the Southwest corner of Hopkins County and a small portion of neighboring Rains County.  Our school mascot is the Hornet, and school colors are green and gold.

Miller Grove School is located in the Northeast Texas community of Miller Grove.  The school is at the intersection of FM 1567 and FM 275 S., between the towns of Cumby and Emory, Texas.

Molding students for success by fostering creativity, strong work ethic, academic excellence, and respect for self and others.

As Hopkins County began to be settled, shortly after its formation in 1846, many families began to move to the Miller Grove area in search of good, cheap farmland.  As a result of the growth in population there arose a need for a school in the small community.  In August of 1860 a local landowner, Franklin Marrs, deeded 5 acres of land to three men who were more than likely the first school trustees (namely Thomas Proctor, James Dannell, and Jason Clark).  The land was set aside for school and church purposes.

The first school building was a one room log cabin, located south of the current Agriculture building.  Mr. Jeff Pippin would refer to this early building as he gave his opening address on the first day of school every year throughout the 1930’s.

Near the turn of the century a two story frame building was built to serve the community.  This building was altered, or remodeled (circa 1910), and the upper story was used for the meeting hall of the local Woodman of the World chapter.

The third Miller Grove School was another tidy, two-story, frame building, which sat on the site of the present Elementary School building.  The 1939-1940 school year brought with it a brand new brick facility.  The new building was started a year or two earlier, but was completed in time to start classes there in the fall of 1939.  The new building was a result of much growth within the community.  Another factor that attributed to the school’s growth was the consolidation of Bonanza, Cedar Point, Center Point, County Line, Cross Roads, Divide, Greenview, Palestine, and Simmon’s Chapel schools into the Miller Grove district.  1940 was also the first year for the school to sponsor our now traditional “End-of-school Stew”.  Prior to this time, the school would have a picnic or “dinner on the ground” at the end of each school year.

Tragedy struck the establishment one winter night, and the lovely new building burned.  It was only a few years old, but the community pulled together and began to rebuild.  Miller Grove’s fifth school building was completed by September of the following school year.  It was the second brick structure, and was a long straight building that had been erected in the center of the campus.  This building remained the home of the fighting Hornets for nearly sixty years, until the spring of 2002.  At that time, the campus split with the addition of a newly developed, fully functional, High School located at the south end of the campus; while the Elementary School remained at the north end of the campus.  The cafeteria, gymnasium, and vocational agriculture building are all that separate the two schools.

Although many changes have occurred over the years, education is still top priority at the Miller Grove Independent School District.

OH, We will honor you forever,
Miller Grove High School.
As symbols of our faith together,
We wear the green and gold.
Victory we bring forth honor, love, and justice too.
Hornets’ loyalty is lasting,
Will always see you through.