The Lady Hornets are advancing to the area game in volleyball! They took a big win in three sets on October 23rd from Yantis to claim the district champion title. The score was 25-8, 25-11, 25-8, adding to the girls undefeated streak and have not lost a single set since district has started.

“It was great to win the district, but I am extra proud that we kept consistency and didn’t lose a set. It would be incredible to be able to advance past regionals, but ultimately my goal is for the girls to play relentlessly, with heart, and to finish each game from here on out knowing that each of them gave their maximum effort and focus for the team. I am blessed beyond measure to be able to enjoy this season with such a wonderful group of girls,” stated Coach Ana Billingsley.

The girls are super excited to get started into playoffs and to try to make history for the second year in a row, but it is not going to be easy. They have some tough opponents on the road to state finals, but the girls are ready to give it everything they got.

Junior, Alexis Green was out last volleyball season with a torn ACL, is back this season playing with purpose.

“I’m very nervous because of the fact that it is coming to an end,” said Alexis Green.

Libero, Lauren Bullard has helped out the Lady Hornets more than once. The sophomore sacrifices her body to get to all the balls that she can, even if there is a chance that the ball won’t go back over.

Lauren said, “I am super excited to see how far we make it and a goal for us this season is to make it to state.”

There are three senior girls on the team and they are determined in their quest for  winning gold. The senior group of girls consist Alexis Serrano, Cara Ford, and Rosa Schones. They have been on the varsity team for the past four years and they were Coach Billingsley’s first group of girls to coach. The girls have played hard throughout all four years, but their time being on the volleyball court is ticking down.

“It is crazy that it is almost over, but it is our time. It is happening this year.” Alexis Serrano said.

The Lady Hornets will be playing on Thursday November 1st against Union Hill at Mt. Vernon at 6 P.M. Be there and be loud for the girls as they play for the area title! 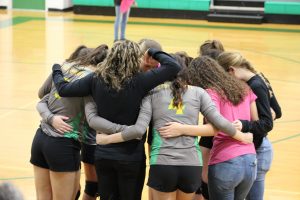