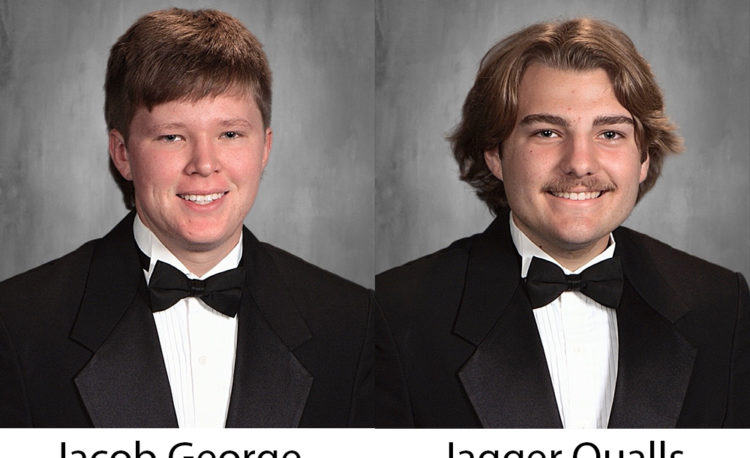 Jacob George has been named the Valedictorian of the Miller Grove graduating class of 2022 with an overall GPA of 101.9. Jacob is the son of Clint and Traci George, the brother of Nathan George, and the grandson of Glen and Carolyn George,and Bill and Bobbye Harris. In his four years of high school, he participated in basketball and baseball. He was awarded the All-District Defensive MVP, All-State Honorable Mention Catcher, and helped his team advance to the Regional Finals in baseball. Jacob was also involved in Academic UIL, was a member of the National Honor Society, Alliance Bank Student Advisory Board, and Chamber of Commerce Leadership Class. He enjoys hunting, being outdoors, and spending time with friends and family in his spare time. Jacob will graduate this spring with his Associate’s degree from Paris Junior College and will continue his education at Texas A&M University College Station. There he plans to pursue both a Bachelor’s and Master’s degree in Business.

Jagger Qualls has been named the salutatorian of the Miller Grove graduating class of 2022 with an overall GPA of 99.61. Jagger is the son of Cody and Jana Qualls and has one younger brother, Wyatt Qualls. Jagger has participated in varsity baseball, basketball, and track. He has received 1st team All-District Pitcher, Offensive MVP, All-State Outfielder and Honorable Mention Pitcher in baseball, and contributed to the success of the Miller Grove baseball team. He has been a member of National Honor Society and been active in Academic UIL where he has qualified for State in Lincoln Douglas debate two years in a row. Some of his favorite things to do in his free time include spending time with family and friends. Jagger will graduate in May from Paris Junior College with his Associate’s degree in Multidisciplinary Studies. Jagger will attend Southeastern Oklahoma State University, where he intends to major in Aviation. Jagger hopes to excel throughout flight school and become a professional aviator in the future.