Miller Grove School competed for the first time ever in a robotics competition on Saturday at Prosper High School at the CoCo BEST Game Day. Against 41 teams MGISD placed 25th placing higher than many of the rookie teams and several larger schools. 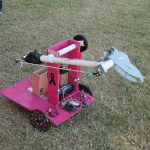 The robotics class started six weeks ago with two boxes of supplies and raw materials such as plywood, cardboard, PVC pipe, etc. and planned, engineered, manufactured and programmed a robot to perform in this year’s Bet the Farm theme competition where the robot had to harvest corn, tomatoes, lettuce, etc., as represented by yellow paint rollers, wiffle balls, shower loofahs, etc. They also had to plant seeds (golf balls), round up pigs, close gates and actuate an irrigation valve – all in a three minute round. There were eight rounds and Miller Grove scored 535 total points. Oh, yeah. And the robot was bright pink for Breast Cancer Awareness month.

There’s way more to robotics than just the robot. In addition to the robot competition, the class maintained an engineering notebook summarizing their research and engineering methods throughout the challenge. They also put together a marketing presentation and plan to market the robot to judges who stopped by the both and interviewed the students on what they learned. 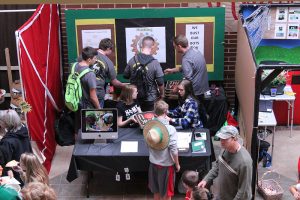 There were many late nights and all the students worked very hard and should be very proud that they did so well in their rookie year. Not only did they perform solidly, they established a legacy moving forward that next year’s robotics team can build upon.

BEST, Boosting Engineering, Science, and Technology, is a national 6-week robotics competition in the United States held each fall, designed to help interest middle school and high school students in possible engineering careers. The games are similar in scale to the FIRST Tech Challenge. Miller Grove is a member of the CoCo (Collin County) BEST Hub. A Hub is a collection of schools similar to a district in other school sports.

Many thanks go out to the students, parents, coaches, mentors, volunteers and others who gave up time, money and brain power to make this happen.